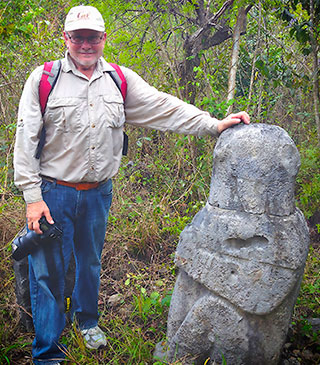 William Frej, an award-winning photographer, began his career as an architect and later served as an international development specialist as a career diplomat in the U.S. Senior Foreign Service with the Agency for International Development, living in Indonesia, Poland, Kazakhstan, and Afghanistan and traveling extensively in Nepal, Pakistan and Central Asia and, most recently, Mexico. Always with his camera at his side, he has been photographing Indigenous people and their environments since the 1970s, documenting the changing lifestyles and architecture of many of the world’s most unique and ancient cultures. He has spent considerable time since 2015 photographing both the religious rites of Mexico’s Indigenous communities and the contemporary Maya, and the ancient cities their forebearers so skillfully created over a millennium ago.

Mr. Frej’s 2020 project, a fine art photography book on Maya ruins and an early Maya explorer and photographer, Teobert Maler, Maya Ruins Revisited: In the Footsteps of Teobert Maler, (Peyton Wright Gallery, Publisher/University of Oklahoma Press, Distributor) was released in October 2020. This book has been the recipient of fourteen major awards, including Best Photography Book of 2021 from the Independent Press Award, the International Book Awards, the Foreward Indies Award and the National Indie Excellence Awards; and Silver Medals from the Prix de la Photographie Paris, Next Generation Indie Book Awards, IPPY Independent Publishers Award, and the Moscow International Foto Awards. His second book, Seasons of Ceremonies: Rites and Rituals of Guatemala and Mexico, was published by the Museum of New Mexico Press in October 2021, and is the recipient of thirteen major awards, including four Photography Book of the Year awards. His latest book, with Anne Frej, Travels Across the Roof of the World: A Himalayan Memoir was published by George F. Thompson Press in September 2022.

Mr. Frej’s work has been shown at a variety of venues. He is represented by Peyton Wright Gallery in Santa Fe, New Mexico where he has had seven one-man exhibitions. His work has also been shown at Peters Projects/Gerald Peters Contemporary and the Museum of Spanish Colonial Art in Santa Fe, New Mexico. In 2014 his one-person photographic exhibition Enduring Cultures was featured at Galeria La Eskalera in Merida, Mexico as part of a citywide arts festival. Additional one-man exhibitions include Nomads of Kyrgyzstan in Almaty, Kazakhstan in 2008, Himalayan Pilgrimage at the Museum of Asia and Pacific in Warsaw, Poland in 1998, and Tanimbar to Tibet at the Duta Fine Arts Museum and Gallery in Jakarta, Indonesia in 1991. He has participated in exhibitions The Eye Gallery in San Francisco in 1987, the San Francisco Arts Festival in 1976 and 1977, and the Tucson Arts Center in 1972. His photographs of Peru received purchase awards from the San Francisco Arts Commission in the 1970s.